Sincere and widespread regret has been occasioned not only in the diocese but in many parts of Ireland at the death, which took place in the Co. Hospital, Letterkenny, on Wednesday of the Archdeacon of Raphoe, Very Rev. John Canon Deeney, P.P., V.F., St Johnston.

Aged 85, he had been in failing health for some time, but it was only recently that he had to give up active parochial work.

Born in Glenvar, Archdeacon Deeney was a native Irish speaker and throughout his long priestly life he was imbued with a strong attachment to the language and Gaelic culture generally. After completing his secondary course at the old seminary in Letterkenny he studied for the priesthood in St .Patrick’s College, Maynooth. His ordination took place in St. Eunans’s Cathedral, Letterkenny, by the then Bishop of Raphoe, Most Rev. Dr. O Donnell, in 1909.

He was curate in Golan, Gweedore, Kindrum and Kincasslagh, after which he spend a number of years as rector of the Marine Industrial School in Killybegs. He resumed parish duties in Fintown as curate and it was form there that he was appointed Parish Priest of St. Johnston in 1943, on the death of Very Rev. James McDaid P.P.

Archdeacon Deeney, one of the best beloved priests in the diocese, devoted himself with undiminished zeal almost to the end to the spiritual and material welfare of his parishioners. A man of high scholarly attainments, he was an authority on local history. He also rendered valued service to the Pioneer T.A. movement, being chairman of the Diocesan Council and having much to do with organising Temperance rallies in the diocese. Deeply interested in music, he had bands formed in several of his parishes and also in the Industrial School. In all the parishes in which he ministered he endeared himself to the people and won the respect and esteem of all creeds and classes.

Among his fellow priests he was looked upon as one who typified the highest qualities of the sacred office. He was assiduous in attention to parochial projects such as the building and renovation of churches, schools and parochial houses. While in St. Johnston he was responsible for the provision of the new church at Killea and a new school at Magherabeg, Manorcunningham.

He is survived by one brother, Mr Hugh Deeney, ex-N.T., Glenvar. Another brother was the late Mr. Daniel Deeney, Inspector of Schools, and a sister was the late Miss Margaret Deeney, N.T., a leading figure in educational circles in Donegal. 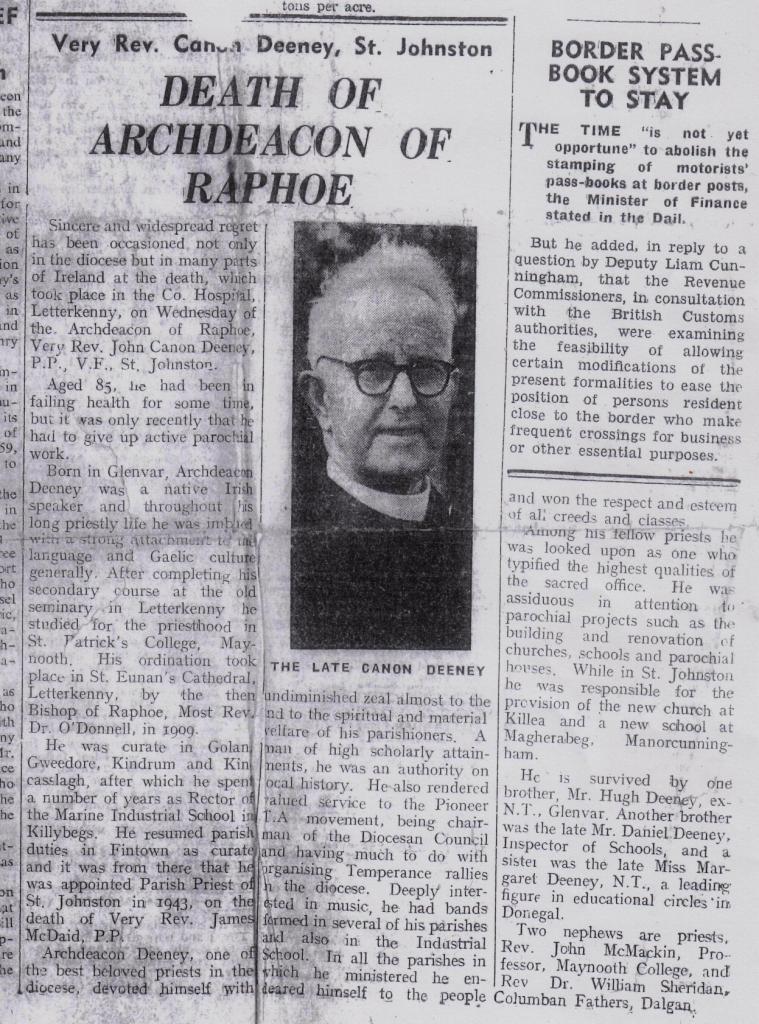