The following information comes from A Return from the Clerk of the Peace of Every County in Ireland, of the names and places of abode of every Blacksmith whose forge has been registered, and who has received a Licence at quarter Session, during the last 10 years, British Houses of Commons Sessional Papers, 1843, Vol L, page 51.  The information was submitted by James Cochran, Clerk of the Peace, 5th June 1843.  There would have been blacksmiths who did not bother registering.  The registered blacksmiths for the St Johnston and Carrigans area were,

James McCoy of St John's Town (as given in the report).   Hugh Doherty of  Monreagh, Carrigans.  James Hagan is listed as Churchtown – the Churchtown near Taughboyne Church?

James Carland of Drummuckla and  Michael Burns Ballylennon would have served the area as well.

There used to be a Blacksmith’s at the Forge as it was called in Craighadoes, St Johnston.  It was situated on the slopes of Binnion Hill close to Craighadoes Chapel of Ease, Church of Ireland.  The buildings have been replaced now for almost thirty years (2022 time of writing).  They used to look like whitewashed sheds. 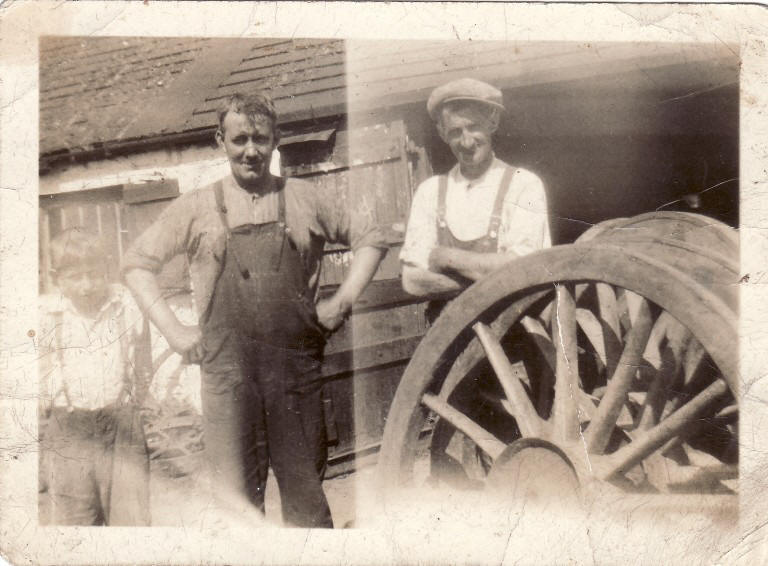 John Crawford, his father James Crawford the blacksmith and neighbour Paddy Brown.  They were drawing water from the well at the bottom of the brae.  Bob the horse which was drawing the cart died soon after this picture was taken. 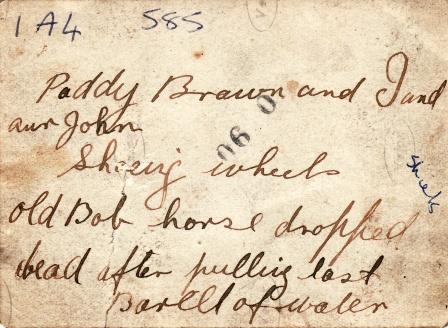 A ceramic version of Psalm 23, The Lord is my Shepherd etc, was cemented into the gable facing the Chapel.  It had a green leafy design and had some cracks on it with the psalm in nice stylish black lettering.  It looked like a scroll.

The blacksmith usually established his business near running water which he needed for his work and how this problem was resolved at the Craighadoes Forge is a puzzle.  There is no running water close by.  This may suggest that some kind of reservoir was used.  If so he might not have been terribly busy for the burden of having to get water all the time for a busy business would have been a serious one especially during winter frosts.

The Forge was a popular gathering place.  Even in winter this was the case with people gathering in the Forge to chat and enjoy the heat.  If you wanted news that was where you went.  Many deals were made there as well.  It was good to make an excuse to the blacksmiths if you had something to sell and wanted word to get around.   The blacksmith was probably the most important craftsman in the locality because without him the tools of the farmer couldn't be made.  He made plough-irons, pikes, axes, as well as making and putting on horseshoes on the horses!  The blacksmith made his own tools as well.

The housewives from the slightly wealthier homes came to the blacksmith to have fire irons made, and even pots and griddles.  It is possible and likely that the Forge in Craighadoes made some items for the fishermen as well.  Anchors would have been produced if so.  The blacksmith was trained to make dozens of items.  Blacksmiths tended to follow a hereditary pattern of fathers being replaced by sons as blacksmiths.  The fathers passed down their knowledge to their sons and trained them.  The apprentices of the blacksmith were often his own sons.  The blacksmith worked in a fair amount of darkness so that he could observe the glowing iron he was planning to shape into some tool or utensil or horseshoe or whatever properly and deal with it efficiently.

The hearth in years gone by was the workshop of the house - it was where people gathered around to keep warm and socialise and play cards.  It was where the housewife or the cook kept the cast iron pots boiling and cooking.  These pots had three legs.  There was a small pot called the skillet which was used for making brothan or porridge.  These pots were suspended over the fire on a crane.   And of course we  must not forget the big black kettles either!  The blacksmith had the job of making and repairing the all-important cranes.  In essence, whenever somebody saw the crane they would have seen a reminder of the blacksmith.  The blacksmith's importance cannot be overestimated as he often made the cooking vessels and other important items such as the griddle which was used for baking little scones and cakes.   The griddle was very commonly used for baking soda farls.  The griddle was also suspended from the blacksmiths crane.

The blacksmith fashioned the iron tongs for the hearth and the pokers and parts of the hearth brush.

If you were building a house and needed nails, you had to go to the blacksmith to purchase them.

Being a blacksmith was very thirsty work.  Many's the blacksmith who had to get his apprentice to bring him some buttermilk to drink.  It could not be kept in the warm forge as with the heat it would rapidly spoil.  So the apprentice would have probably gone to the smiths home to get the buttermilk.  Buttermilk was the thirst quencher of those days as coke is now!

The blacksmith was granted a superstitious reverence among the people because of his importance.  There were rumours that blacksmiths had the magic power to make things happen and iron was thought to be a potent charm against evil and harm.  Some horseshoes were made simply so that they could be nailed on the doors of sheds and houses to ward off harm and evil.  To lay a curse, the blacksmith had to be sure the person the curse was meant for deserved it and then he would mutter his curse as he turned his anvil around.  The Forge water would have been collected for use in the home to treat injuries as it was thought to have antiseptic properties.  It is more likely that people thought the water was charmed than that it had any genuine natural capability for killing infection.

James Crawford (depicted below) was the last blacksmith to work in the Forge as it was called.  Indeed, he was the last blacksmith ever to have worked in the St Johnston and Carrigans area.  He died in 1975.  He was listed in the 1911 census as 13 years of age meaning he was born in 1898 and he could read and write.  The family was listed as living in Craighadoes.  His blacksmith father John was 45 and his mother Martha - nee Galbraith - was 39.  James' son John who died in 2007 chose not to follow in his father's footsteps.  The family is buried in the churchyard at Ballylennon Presbyterian Church. 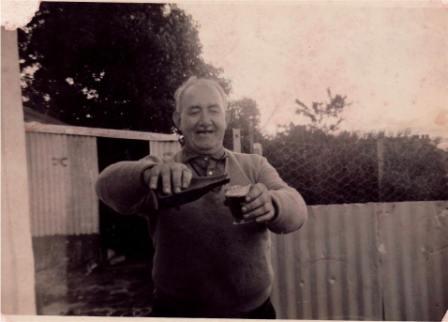