My name is Catherine Peoples, formerly Devenney.  I’m a busy wife and mother.  I enjoy helping others particularly those of the older generation.  It was because of this that I became involved in the Meals on Wheels.  I describe myself as a Meals on Wheels Helper.

In 1963, the County Medical Health Officer expressed a concern to Nurse Rita Pearson about the need for welfare services for senior citizens belonging to the St Johnston and Carrigans area.

A group got together in response to this in St Johnston in 1966 and formed the Social Services committee.  Nurse Pearson called a meeting in the St Johnston No 1 School and so the group and committee were formed as a result.

Members of the Committee went to Drumcondra Football Club to see how the Dublin Meals on Wheels system was implemented and decided to seek funding from Donegal County Council towards establishing a similar system in the St Johnston and Carrigans area.  The funding was granted and Meals on Wheels began.  A container was made for the storage of food as it got delivered and there were drivers and cooks.  One time there was a snowstorm and a tractor was used to deliver the food.

The Meals on Wheels is taken out every Tuesday and Thursday.

In 1995, a volunteer asked me to help out.  I agreed and 16 years later I am still a volunteer.  I really can’t believe its 16 years and I wonder where the time has gone.  I really enjoy my role as volunteer.  I learned so much from the different challenges that it brought.

When I first started, Phonsie and Noel Brown cooked the dinners in their home.  Ten years ago, the dinners were prepared in Lifford Hospital and that continues to this day.

St Johnston Social Services obtains funding for Meals on Wheels and pays the hospital for the meals.

The Meals on Wheels uses a rota of different drivers.  These drivers take the volunteers and the St Johnston and Carrigans Family Resource Centres Support Worker for Older People to deliver the meals.

Some of the drivers have been driving the volunteers for twenty five years.  We appreciate the dedication and kindness of all the drivers.   A lot of driving is involved.

The drivers have to drive around an area replete with byroads and out of the way places.  This can be hard in winter time particularly when we have to make it up Binnion Hill!  We go to Killea and Ballinalaghy to mention a couple of places to show the scale of the driving involved.

In winter time, the people get soup and dinner.  In summer time, they get dinner and dessert.

The system tries to take account of the circumstances of those who are on the Meals on Wheels list.  Some people cannot eat certain things and others may only want the service one day a week.

The temperature of the last meal served on the route is taken and a temperature sheet is filled out.

The people who are on the Meals on Wheels list, value the volunteers visiting them to give them the meals.  It’s a chance for them to have a bit of craic.  It helps to do something about how isolated they may feel.  Yu find that many of them are waiting on your just for company.  At Christmas time, we used to give them presents but cutbacks in funding has forced us to discontinue this.  Sometimes we have found people sick or that they fell and needed medical attention.  We are glad to be able to help them.

The Donegal Civil Defence and Donegal Mountain Rescue helped the volunteers including myself to deliver the meals during the arctic winter conditions in 2009.  This got coverage in the local papers.  You can see the photograph below!

I feel I have made wonderful friends through my work as a helper and the work itself is very enjoyable though not always easy.  I feel privileged to be part of Meals on Wheels. 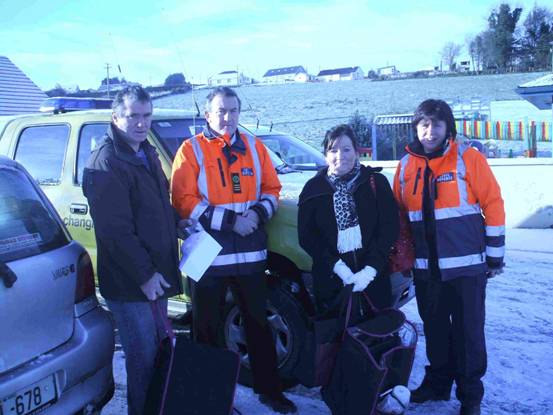