Story of a St Johnston House 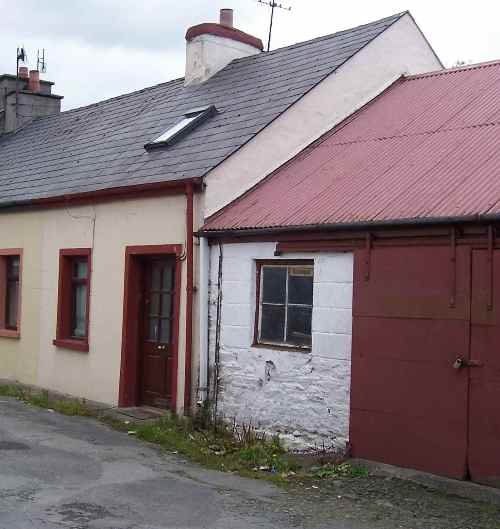 An indenture or deed was made out for this house and two others in St Johnston on 16th October 1855 between Daniel Doherty of Blue Ball who was "Donegal Farmer of the one part" and Robert Campbell of Tullyowen "in the Co. of Donegal aforesaid Farmer of the other part".  It was witnessed by Robert Wilson and Thomas Sharkey and was issued by Caldwell & Robinson Solicitors in Derry.   Daniel received from Robert Campbell, Purchaser,  the sum of £80 sterling.  The stamp cost 10/-.  "Three houses in the town of St Johnston on the right hand side of the street leading to the Railway Station House with the two Gardens in the rere of two of said houses as same were formerly in the possession of William Martin Samuel Colhoun and Arthur Browne bounded on the North by the Street on the South by James Mc Award's farm On the East by James Taylors farm on the property of Dr. Harvey On the West by Brian Harrigan's or Lord Abercorns property situate lying and being in the parish of Taughboyne."

An indenture dated 20th February 1948 between Thomas Alexander Campbell of Castletown St Johnston Farmer of one part and William Porter and Thomas Porter of Main Street St Johnston Merchants of the other part was created.  The stamp cost £1.  It was signed by the Porters in the presence of the Solicitors Assistant in Londonderry and his name was John McConnachie.  It says that Andrew Jonathan Campbell who died on 28th of November 1947 who made his will on 2nd February 1946 and bequeathed all his property real and personal situate at Main Street and Church Lane to his son Thomas Alexander Campbell who then sold it to the Porters.  They paid £400.  The property included the above house and a shop on the Main Street and office houses.  The indenture indicated that some repairs were necessary.  The property sold is on this map which gives a good insight into what buildings existed decades ago in that part of the town.   The Porter's were given the right to use the track at the back of the houses but during reasonable hours of the daytime and to go into the yard adjoining the property of Thomas Alexander Campbell which was then occupied by Alexander Nesbitt his tenant.  Campbell and his heirs were given the same right "for the time being". This right was subject to the rights of Elizabeth Bell who owned adjoining premises and she had undertenants, servants and workmen. The deed was signed sealed and delivered in the presence of John Gillespie Solicitor in Londonderry and Robert Miller, Law Clerk Londonderry.

William Porter and Thomas Porter sold the house on May 30th 1968 to Hugh Dillon.  The Indenture states that the house was formerly occupied by Bertie Magee who rented it from Porter's.  The sale was made in a solicitors office in Raphoe.   Dillon's sold the house in 1982 with the deed being made 23rd August 1983.

The house had stone whitewashed walls inside and a huge old style fireplace when it was taken over in 1968.  It had a ladder going up to the room upstairs.  There was no toilet.