Daisy Campbell was born in August 1918 in Carrowmullen, Fahan, Co Donegal.  Her name was registered as Sarah Margaret Wilson.  She was an only child.  Her mother was called Sarah Jane Wilson.  Her maiden name was Hutchinson.  Daisy's father's name was George.  Daisy's mother was a National School Teacher.  She had to move the family to different places in Donegal to get teaching work.  Sometime in the early 1930's, she got a job in Castletown National School near St Johnston.  They moved to a house in Burnthaw.

Daisy Wilson went to school in Castletown and then moved on to the boarding school in Raphoe known as the Royal School.

Daisy went to London in 1937 and became a Civil Servant.  She was injured in a bomb attack in 1941 during the Blitz.  Her lodgings were destroyed.  Daisy lost her ear.  She decided to leave London and she worked in Pennyburn in Derry for Harland and Wolff.

Tommy Campbell was a farmer in Castletown.  He and Daisy got married in 1946.  They lived in a thatched cottage believed to date from the time of the Plantation and it was her home until she took a stroke in January 2007.  He died prematurely in 1958.  He was only 47.  At that time, Daisy was left to manage two young children Jonathan and Jane, and her mother, Sarah Jane, who had been bedridden through having taken strokes.  Sarah Jane passed away in 1971.  Daisy returned to work and then she started writing and travelling.  She adored Crete where she stayed for six months in 1978.  She took a holiday there in 2006 - her last time there.

Daisy was an active and valued member of the Irish Countrywoman's Association and St Johnston Social Services.  She helped out at functions for senior citizens and made Christmas presents that were given out to people in nursing homes.  She was a gifted writer and produced the invaluable and excellent book of local history, The Laggan and Its People.  She became president of the Past Pupils Association for the Royal School in Raphoe and edited their magazine.

In 1993, Daisy was given the honour of being Donegal Senior Citizen of the Year.

In 2003, she was a guest of the St Johnston and Carrigans Heritage Group and brought in a wooden pot of great age that was in her attic.

She passed away peacefully in Beach Hill Manor Nursing Home, Fahan, on April 23, 2008 and interred in the churchyard of St Johnston Presbyterian Church. 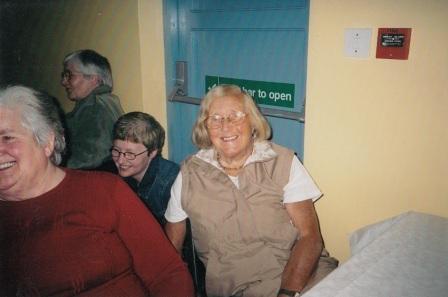 Daisy Campbell who died on April 23rd 2008 will be remembered by all who knew her for her sense of adventure, her generous nature and her determination to enjoy life to the full.

She was born Sarah Margaret (Daisy) Wilson in August 1918 in Carrowmullen, Fahan, Co. Donegal. Her mother Sarah Jane (born Hutchinson) was a National School teacher and her father George was a British Army Sergeant Major who served in WW1. Daisy was their only child.

Her mother initially depended on temporary teaching jobs, so they moved about through east Donegal. Eventually, in the 1930s they settled in Burnthaw, Castletown, St. Johnston where Daisy's mother had a position in Castletown School; after some time she secured a permanent post in St. Johnston School. Daisy attended national schools in Fahan and Castletown and went on to secondary education in the Royal School Raphoe.

Her love of travelling began at an early age and she travelled to London in 1937 to work in the civil service. That came to an abrupt end in 1941 when the digs she was living in were bombed during the Blitz. After recovering from her injuries (she lost an ear), Daisy returned to Derry where she worked as a secretary in the Harland and Wolff shipyard at Pennyburn.

In 1946 she married local farmer Tommy Campbell of Castletown. In 1954 Daisy’s mother was afflicted with several strokes which left her bedridden and she came to live with Daisy in Castletown. Then Tommy died in 1958 at the age of 47. So Daisy aged 40 was left on her own with two young children and an invalid mother. After her mother died in 1971, Daisy took up a post as secretary in an accountant’s office and really enjoyed being back in the workplace.

Daisy managed to regain her traveller's wings in the 1970s and from then until two years ago she visited most of the countries in the world. She was always a keen writer and her travels resulted in articles in magazines and newspapers and humorous slide show talks to local ICAs and other clubs.

Her favourite holiday spot of all was Aghios Nikoloas, Crete. She rented a house there for six months in 1978 and visited again more than 15 times. Her last visit was in 2006 when she was 88 years old.

In 1979 she completed and published a short local history of the Laggan Valley, East Donegal. She also wrote poems, short stories and some plays. Plays were written to order; for example a play for the occasion of the anniversary of the Reverend Makemie from Ramelton who went on to found the Presbyterian Church in America. She also wrote a murder mystery novel but it was never published.

Daisy read widely and had built up a broad knowledge of English literature. Her understanding was deep enough to be able to help university students with critical essays, for example on James Joyce's Ulysses.

Daisy greatly enjoyed the activities and camaraderie of her local ICA and through it developed her writing skills, public speaking and also took up painting. She was an active member of St. Johnston Social Services committee for many years. She enjoyed preparing Christmas presents to distribute to local nursing homes and helping out at Senior Citizens events. She was named Donegal Senior Citizen of the year in 1993.

Happy memories of her days in Raphoe Royal School prompted her to join the Past Pupils Association committee and she was editor of the magazine for many years. She was elected President of the Association in 1973.

Her later years in Castletown were made possible and greatly enhanced by the kindness and care of friends and neighbours and weekly trips to Lifford Day Centre which she looked forward to immensely. She continued to live alone in her beloved thatched house (which is thought to have dated from the Plantation of Ulster) until she had a stroke in January 2007. After hospitalisation she went to live in Beach Hill Manor Nursing Home, Fahan which was just a mile or two from her birth place. She was very happy in Beach Hill and appreciated the excellent care of the kind staff and the company of the other residents. She continued to spend the weekends with her family.

Daisy will be greatly missed by her son Jonathan, daughter Jane, son in law David and grandchildren William, Jonathan and Sarah.