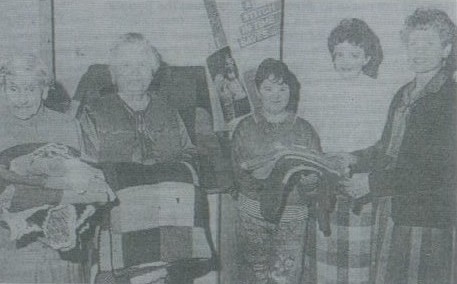 Mrs Ann Robertson on the right was the Vice-Chairperson of the Derry Branch of Save the Children Fund. Taughboyne ICA and Monreagh National School is shown as giving her gifts of knitted woollen blankets and jumpers to be used to help raise funds for the Third World.  From left, Mrs Mary Donnell, Carrigans, and Mrs Rebecca Wilkin, Adeline Wilkin of Monreagh NS, and Mrs Rena McClean (nee McConnell) are shown.  Rena was the president of Taughboyne ICA and was a contestant on Housewife of the Year hosted by Gay Byrne and sponsored by Calor Gas.  Mary Donnell and Rebecca Wilkin were the longest serving members of the the Taughboyne Guild.