The Orange Order, a Protestant fraternity(similar to the AOH which is a Roman Catholic fraternity), has been in existence in St. Johnston since the early 1800’s.

Times are much different now to when LOL992 was formed and the demographics have certainly changed in the area. There once was a two thirds Protestant majority in the village! At its zenith the lodge could boast around two hundred members.

The Twelfth of July, the anniversary of the Battle of the Boyne, was marked with an Orange Arch being erected and a parade of the village. The last Twelfth in St. Johnston village was in 1914. This was the year when the First World War broke out and members of LOL992 joined with others from the local community in that conflict where over 1100 Donegal men and women were killed. This great sacrifice is remembered each year at the Annual Somme Service. Following the war came the uncertain years of Partition and the Irish Civil War. During this time the Orange hall was occupied by republicans who destroyed all the lodge records.

The “Troubles” in Northern Ireland had a bad effect on the border areas both socially and financially and sectarian tensions often marred life here. Hopefully those days are now consigned to the past.

St Johnston ladies lodge, WLOL168, was formed in more recent years and both lodges meet in the Orange Hall situated on Main Street. The Orange encourages members to be good citizens, to attend public worship in the Reformed Faith and to maintain their history and heritage. Charity is a big part of any lodges work. The local lodges contributed to the €1,000 given to Donegal Hospice and the €54,000 donated to Cancer Research. Members have always been involved in the business and commerce of the area from major employers to ordinary workers. Despite increased secularism in modern society, local lodges are currently going through a period of growth. Much hard work has been done to modernise the Orange hall which hosts meetings, bowling tournaments, table quizzes and social functions. Orangeism, is intrinsically intertwined into the cultural diversity of St. Johnston and Donegal. The Orange family in St. Johnston look forward to greater integration and acceptance in this time of reconciliation. May this time herald a future of tolerance and prosperity for everyone on this Island for all time.

13 July 1831.AGREEABLY to yours of the 8th instant conveying the commands of his Excellency the Lord Lieutenant, I had all the police of the barony assembled here at an early hour yesterday morning and kept at close drill during the day in order to be in readiness if called upon. There was no kind of procession or anything emblematic of party feeling in this district but the people busily employed as usual at their several vocations, except in St Johnstown where two lodges of Orangemen met and walked in procession for about three miles along the road with colours flying and drum beating. They had a triumphal arch placed in St Johnstown which all persons passing from Strabane to Derry were obliged to walk under. They drank together about 200 in number and returned to the irrespective homes without any breach of the peace being committed. Too much praise cannot be given to the Roman Catholics on this occasion as many of them joined in the procession and seemed to enjoy it the same as the Orangemen I heard nothing of this procession until a late hour last night 1 then got a party and patrolled on to St Johnstown during the night found all tranquil 1 am. 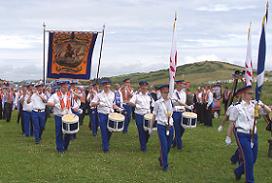