Some Priests Buried in St Johnston, near St Baithin's Church 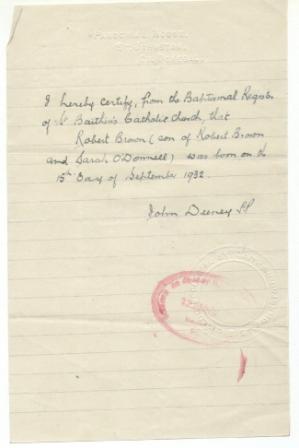 The Archdeacon owned a boat and often went out on the water with it on a Monday.  He owned a Rover car and used a red brick lodged at a wheel to keep his car from moving off when it was parked at the chapel.  The chapel car park was then lined by a hedge along the road.  The Archdeacon had been in Fanad working prior to coming to St Johnston as parish priest.  He was a native Irish speaker.

Archdeacon Deeney was succeeded by Canon Joseph Mulreany who left the parish in 1969 to go to Stranorlar.  He was Parish Priest in Stranorlar until 1984.  He was ordained 5 July 1931 and died 13 October 1984.  He was Vicar General of the diocese and was a Monsignor.  His body lies near the Roman Catholic Church at Stranorlar. 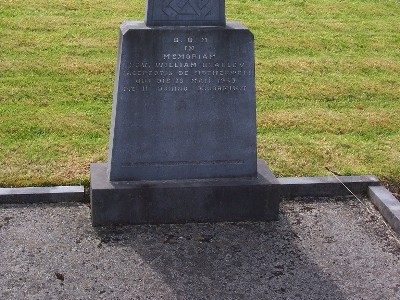 Memorial for Reverend William Bradley, Priest of Motherwell died 15 May 1963 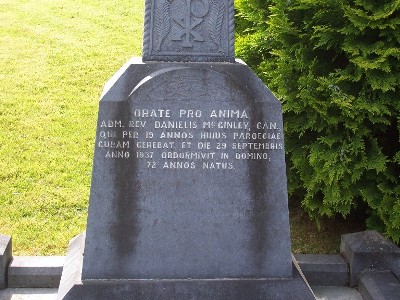 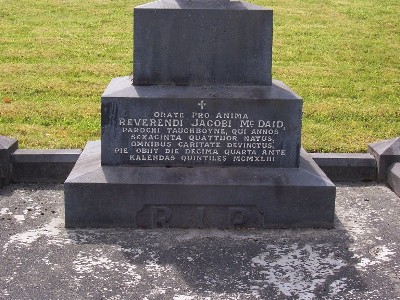 Reverend James (Jacobi in Latin) Mc Daid was parish priest of Taughboyne having died in 1943. 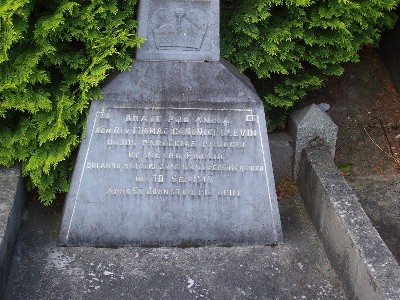 Canon Thomas Slevin was Vicar General of the Diocese and parish priest of St Johnston.

There exists a letter from the Lord Lieutenant's office dated 9th August 1876 to Reverend Thomas Slevin, CC, Killybegs, Diocese of Raphoe.  It is about the decision to discharge John Byrne, a prisoner in Lifford Gaol, on condition he keeps the peace for two years "towards Ellen Dogherty and all Her Majesty's subjects".

The above photographs were taken in July 2009