THE RAILWAY - STJOHNSTON AND CARRIGANS

The Londonderry and Enniskillen Railway opened in 1847.  St Johnston was along the route.  There was St Johnston Station and Carrigans Station.

The station master's house is depicted below. 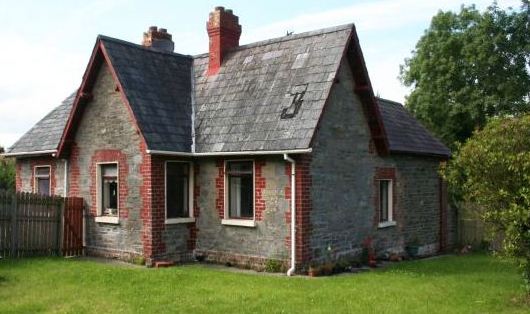 If you wanted to travel from St Johnston to Derry you paid 4d for third class travel.  7d for second class travel.  8d for first class travel.  The Londonderry and Enniskillen Railway later became G.N.R. (Great Northern Railway (Ireland).  The G.N.R. closed on 15th February 1965.  The burgeoning of road transport was a factor in this closure but nevertheless the closure aversely affected the economy of the towns of St Johnston and Carrigans leading to a huge diminishing in the number of local shops and businesses.

The last time the train went through St Johnston was 13 February 1965 the night Kathleen Peoples of Ard Baithin passed away.

The first Massey and Ferguson tractor in Donegal came to St Johnston station.

Jim Pearson ordered the first ever combine harvester in Donegal.   People gathered at the station for its arrival just to see what was to them the equal of man walking on the moon.

Hughie O Donnell was born on the Main Street, St Johnston.  He was 77 when he died in St Joseph’s Hospital, Stranorlar on 13 March 2008.  His mother was Elizabeth O Donnell nee Martin and his father was the former stationmaster of the train station, St Johnston. His name was Jim.  Jim and Elizabeth are buried in the Old Cemetery, St Johnston.  Hughie worked for a time on the railway himself and he became milkman and did that job for 38 years.  He retired in the late 90s.  He had been a keen sportsman.  He played for St Johnston Cricket Club.  He played for Raphoe Hockey Club.  He was buried on Saturday 15th March at St Johnston chapel.  The mass took place about midday and his son Father Joseph O Donnell laid a cricket bat and a hockey stick alongside the coffin with a picture of John Wayne his favourite actor.   Fathers, Seamus Dagens, Willie McMenamin, Declan McCarron, Doctor Niall Coll, Msgr Dan Carr, Bishop Philip Boyce, concelebrated the requiem mass with Father Joseph.

Top of the Document