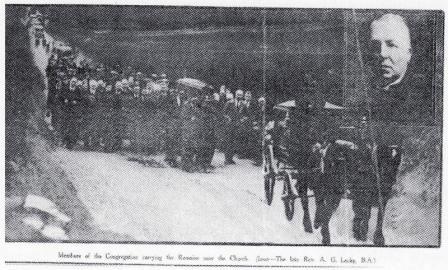 Members of the Congregation carry the remains of Reverend Alexander Lecky BA to Ballylennon Presbyterian Church for burial.

Rev Lecky BA is depicted in the inset.

The Londonderry Sentinel, January 15, 1929 reported that there was a short funeral service at Reverend Lecky's home in Feddyglass.  Rev J M A Beattie of Convoy and Rev James Black, Donaghmore officiated at the service.  The coffin was covered in floral tributes.  Members of the congregation carried the coffin for the last 300 yards as the remains were taken from his home in Feddyglass to Ballylennon Church for another service.  This service included the Lord is My Shepherd Psalm.   The Moderator, Right Reverend TA Smyth MA, LLB, delivered a short address.

The route depicted is the road between Drumucklagh and Ballylennon.  He ministered in Ballylennon for over a quarter of a century.  He had been a minister for 57 years when he died.  The funeral cortege was over a mile long.