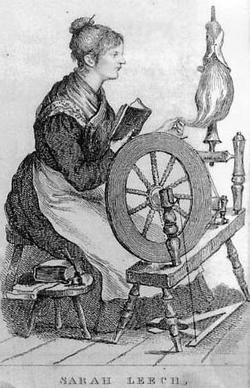 From the 1828 book, Poems, on Various Subjects, by Sarah Leech, A Peasant Girl, with a biographical memoir, printed in Dublin, J Charles, St Mary Street

Sarah Leech, the subject of this memoir, is the daughter of Thomas Leech, an industrious linen weaver. She was born in the year 1809, at a village called Ballylennan, situated in the County of Donegal, and Parish of Taughboyne, about three miles from Raphoe. At the age of three she had the misfortune to lose her father, who died of a pleurisy, and left behind him a widow with six children, to deplore their loss, without any means of subsistence but what would arise from their own industry. By this sad visitation of Providence, she was deprived of even the ordinary opportunities of education which are afforded to the generality of our peasantry. Her eldest sister, who was fourteen years of age, when her father died, had been taught to read, and she determined to communicate whatever instruction she was able, to the other children: but being obliged to devote her time to spinning, and the care of the younger members of the family, she could do little more than teach them the alphabet, and to know something of spelling.

At the age of six, Sarah was sent to school in a neighbouring village, but being naturally of a timid disposition, it was supposed by the master and her friends, that she had an aversion to learning; even when he visited her mother's, Sarah generally contrived to hide in some corner, for the purpose of being as much as possible removed from his presence; nay, such was the opinion she formed of her teacher, that she fancied he carried something terrific in his countenance. In consequence of this impression on her mind, her mother was frequently under the unpleasant necessity of applying a rod for the purpose of enforcing attendance at school, when the hour of business arrived; but to her great joy, as she most readily acknowledges, at the expiration of less than three months, the school was dissolved. During this short period, notwithstanding her seeming inattention, she improved so much, that she was able to read a chapter in the Bible, and seemed to understand the subject so well, that many persons were surprised at her knowledge. - Soon after her removal from school, she formed a strong desire to improve her mind by reading such books as chance threw in her way, and though the collection was very limited, yet, she gleaned from it considerable information, and a little knowledge of language. Story books were her great favourites, with the tales of which she generally amused the family during the long and dreary winter nights.

There was a family in the village where she resided, that took much interest in her welfare; one member of it in particular, had not ceased to visit her mother and family in their great affliction, so that his name became dear to them as a friend and benefactor, which he still continues to be, to the present moment. He supplied her with a few books, which he thought would be serviceable in expanding her ideas, and giving her a correct knowledge of true religion; and it will be readily admitted by the reader, after a perusal of her serious poems, that her mind, on religious subjects, has not been misdirected.

When she attained her twelfth year, she was permitted, for a very short period, to receive instructions in writing, but as she had now become useful in assisting her mother, and was sensible of the necessity which devolved on her of doing something for her support, she was obliged to relinquish school when she began to appreciate its value, and submit to the drudgery of a spinning wheel, an employment at which she is able to vie with any of her compeers.

It has been remarked by those who have had an opportunity of being acquainted with her, that she was fond of solitude, and has seldom been seen to walk out with any companion, with the exception of one girl, to whom she was endeared by an early intimacy. In her company she delighted to wander through the fields in summer, where she collected, in her excursions, nosegays of the wild flowers, and made her remarks on the various productions of nature. Being gifted with a retentive memory, she generally committed to it such poetical compositions as seemed to meet her approbation, and this seems to have excited in her a taste for versification.

In 1822, her mother removed from Ballylennan, the place of her nativity, to Lettergull, about half a mile distant, and in this village she resides at present. It was here, in her solitary moments, that she first wooed the Muses, for the purpose of passing away the time, but diffidence prevented her from committing any of her poetical effusions at that period, to paper, as she was never able to follow up the subject according to her wishes.

In 1825, some person in the neighbourhood happened to incur her resentment; and, for the purpose of avenging what she considered an insult, she composed some very satirical stanzas upon the individual; but such was her forgiving disposition, that she could not be prevailed on to repeat them, unless to two or three persons in whom she placed great confidence: even her own family were ignorant of what she was writing, when she began to commit her ideas to paper; so that amusement, and not ambition, seems to have been the prevailing motive of her expressing her wild imaginations, in rude rhyme.

About this period, she composed her "Elegy on a Loquacious Old Woman;" which, being circulated through the vicinity, came to the ears of a gentleman then on a visit in that part of the country. He was so struck with the description she had given of the person alluded to, that he immediately set out to pay her a visit, and found her, not in a garret, surrounded by the usual classical associations, but busily plying her spinning wheel in a humble cabin. After some conversation, he prevailed on her to repeat the "Elegy" that she had written, with which she complied, though with evident reluctance. Before he left the neighbourhood, he transcribed some of her Poems; and shortly after, she had the mortification to see them in the Londonderry Journal, with some remarks on her humble situation in life.

In 1826, she was so severely attacked with sore eyes, that it was apprehended by many persons she would lose her sight. While labouring under this severe visitation, during which no less than eight blisters were applied in succession to her neck, she one evening pulled the bandage off her eyes, and wrote down the verses which the reader will find under that head. It is unnecessary to add, that they breathe forth the genuine spirit of Christian resignation under affliction.

For some time past she had a few children under her care, but in consequence of a severe and prolonged attack of rheumatism, which confined her to home, and incapacitated her from walking, unless by the assistance of a crutch, she was under the necessity of giving up school, and returning to her spinning wheel, the only means she has now to depend on for her subsistence. 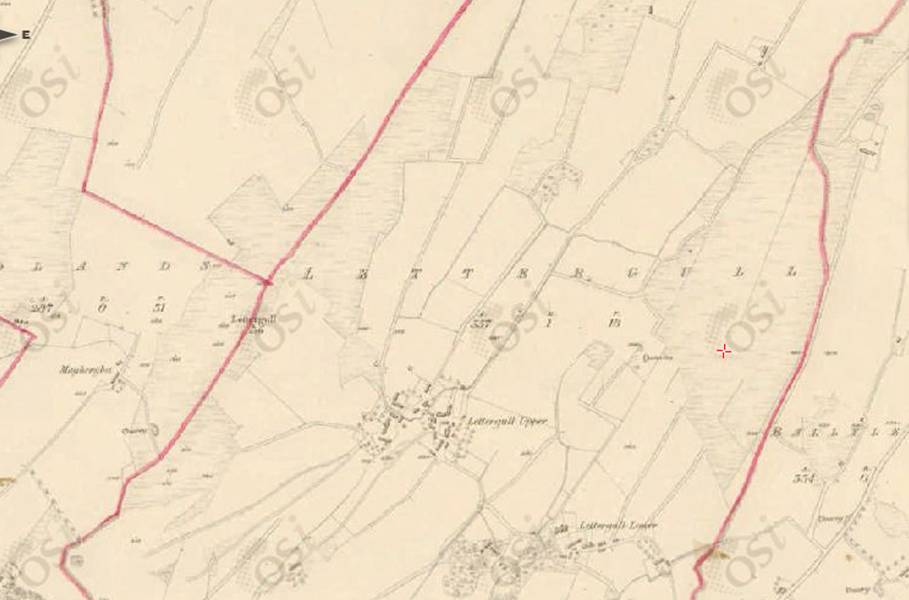