The replacement chapel, the current one, is depicted below as it was in 1860. 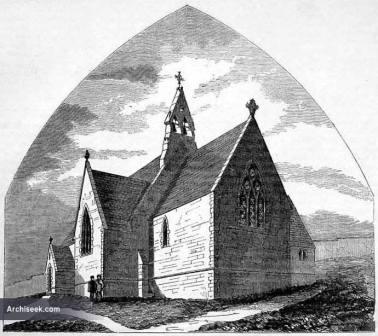 The acre of ground costing £62 had been bought to build the Church of St Baithin from Mr Doherty of Blue Ball, St Johnston.  Edward W Godwin was the architect.

At this time, Bishop McGettigan stayed with the parish priest for the occasion and on Monday he took the railway to Donegal town for a clerical meeting.

9th December 1860 11.30 am - Consecration of the Church by the Right Reverend Daniel Mc Gettigan, Coadjutor Bishop of Raphoe.

Miss Smiley played the harmonium/organ at the ceremony.  Mr Bernard McCloskey was the tenor and the music came from Haydn's Mass.

A Robert Harkin Esq of St Johnston was in the congregation.

The Reverend Michael Martin was CC of St Johnston at the time.  He was ordained in 1857 and died on 14th March 1896 as Parish Priest of Killybegs.  Father Stephens was still Parish Priest and participated in the ceremony.

Bishop Daniel preached a sermon based on the poor as he thought it was appropriate with the area knowing great poverty.

Tickets were sold to permit admission to the ceremony and a collection taken up and the total amounted to £200.  A lunch was provided after and a toast was made to the health of the Bishop of Raphoe, Patrick McGettigan, who didn't come to the ceremony as he was feeling rather unwell.

A marriage certificate I have in front of me from December 30th 1886, states that the chapel belonged to the Registrar's District of Raphoe in the Union of Strabane and in the county of Donegal.  Fr John Sweeney the Parish Priest signed the certificate.  The district and union existed until British Rule ended with the formation of the Irish Free State.

1966-1969 - Renovations, crossties removed from roof, new altar installed and interior changed to accord with the decrees of Paul VI for changes in the Mass, wall built to close off part of the chancel to make a sacristy.  This resulted in the East Window at the back of the Church being obscured until the 1981 renovations.  Altar rail removed.

The confessional box was down at the back of the Church.  It was moved to the North Transept and the confessional was made bigger in the mid-nineties to take on a more confessional room format.  Now only one penitent at a time can go in.  Previously there were two penitents at each side of the priest and when one was finished the priest closed the sliding door and opened the one on the other side.

1981  - Extension consisting of New Hall for Church and New Sacristy and toilets was built, the roof was replaced apart from the Chancel roof.

During the renovations, Houston's Supermarket in the Main Street which had been unused for a time was used as the Chapel. It was in use for five months.  This building demolished in 2005, was originally Duffy's Supermarket.

1 Jan 1982 - Mass resumed in the Church with the Mass in Honour of the Mother of God.

ST. BAITHIN'S CHURCH, ST. JOHNSTON. Since the announcement that the Rev. Dr. M'Devitt, it Dean of Residence in the Catholic University, Dublin, was to preach a sermon in St. Baithin's Church, the greatest interest, was evinced to hear the eloquent  preacher
05 December 1863 - Freeman's Journal - Dublin, Dublin, Republic of Ireland

ST. BAITHIN’S CHURCH, ST. JOHNSTON THE VINCENTIAN MISSION, On next Sunday evening, as already referred to, the Mission which" has been conducted in St. Baithin’s Church, St. Johnston, by the Vincentian Fathers
18 October 1901 - Derry Journal - Londonderry, Londonderry, Northern Ireland

ST. BAITHIN'S CHURCH, ST. JOHNSTON. A MISSION WILL be opened 6th OCTOBER in the above named Catholic Church by Fathers of the Congregation of the Mission. The Mission will continue for Two Weeks.  JOHN DOHERTY, P.P.
27 September 1901 - Derry Journal - Londonderry, Londonderry, Northern Ireland

ST JOHNSTON CATHOLIC CHURCH. LARGE CROSS SMASHED. "dastardly act of vandalism was perpetrated on the beautiful Church of St. Baithin, St. Johnston. on the night of Saturday, when cross erected at great trouble and expense on the highest point of the Church"
02 October 1899 - Derry Journal - Londonderry, Londonderry, Northern Ireland

The Most Rev. Dr. M‘Gettigan will administer confirmation to-day in St. Baithin's Church, St Johnston. A great number of clergymen are expected to assist in the ceremony among them the Very Rev. Dr. Browne
05 September 1861 - The Evening Freeman. - Dublin, Dublin, Republic of Ireland