Robert and Mary Gormley's ages on the form are incorrect.  Robert was 56 at that time. Mary was 58.

The house is listed has having two outhouses - one was a piggery and the other was a fowl house.  House was thatched.  2 rooms.  2 windows in front of house.  One person was sick the day the census was taken 31 March 1901 and there are only three in the house.  Josiah Galbraith was the owner of the house.

Mary Gormley died suddenly at Craighadoes in 1906 on the 20 December.  She had cerebral softening for six months.  Isabella was present at her death.

Later her husband Robert, is described as a widower living in Cuttymanhill, St Johnston, in the census of 1911 and is said to be 74 years old.  It was a thatched one roomed and one window house.  He didn't own the house.  Again this age is probably mistaken.

Robert suffered from chest problems and dementia.  He died in Drumucklagh in 1915 on 21 January at 71 years of age. 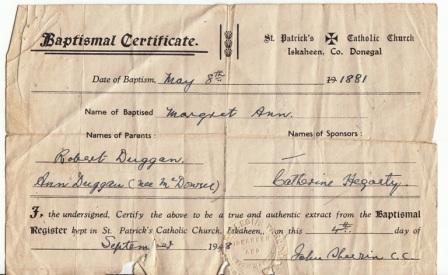 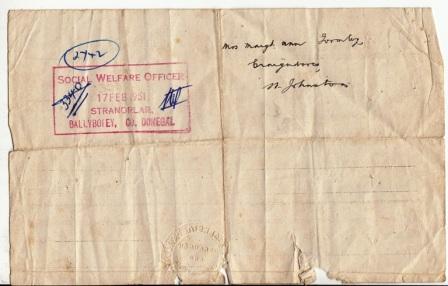 Hugh and Margaret's census entry for 1911 can be seen below.  He is listed as 35 years old.

He personally completed the census form.  He described himself as an Agricultural Labourer.  The house in 1911 was slated.  2 rooms with two windows at the front.  The owner was Hugh Gormley himself. There was one shed.

Their son Hugh Gormley was born November 4 1920.  He was baptised on the 14 November in St Baithin's Church, St Johnston by Rev Daniel McGinley PP.  The sponsors were Francis Houston and Anne Houston. 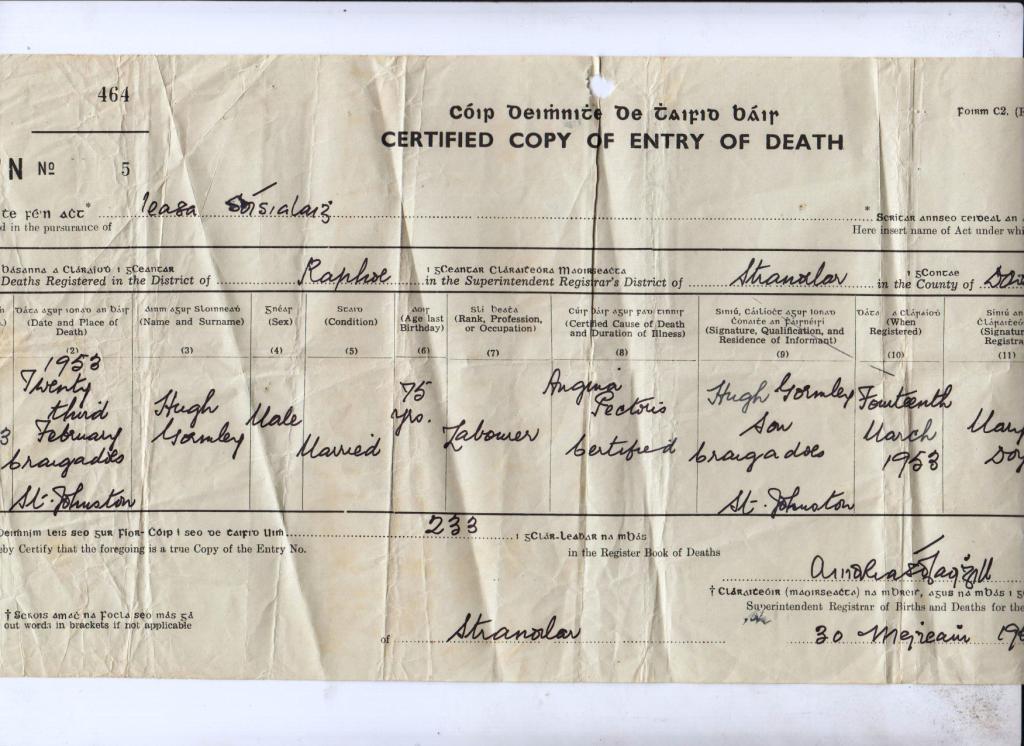 Hugh Gormley is buried at Clonleigh Cemetery, Lifford.  The location is not far to the left as you enter the gate.  The exact site has been lost.  His daughter Mary McConnell was buried there also having died in 1950.

His wife Margaret died 21 September 1963 in Ard Baithin, St Johnston, and is buried at St Baithin's Church, St Johnston.  Her death cert follows and then her memoriam card.

I have now found hugh Coll's father to be Daniel Coll. No known mother as yet. James John Coll was baptised in St Johnston Co. Dongeal in 1860 so they have to be there somewhere. Maybe a paid researcher may be able to help me do you think? Just an idea so I can get a lead to somewhere. The sponsors were a Mary Coll and Robert Gormly. No adress is shown on the record. Denomination is Roman Catholic.