(Mary Bradley is one of the oldest living residents in Ard Baithin housing estate.

She recalls some of the events in her life)

I was born in the Moyle, Newtowncunningham. I was the youngest of six children.My father was Mickey Bradley and my mother, Margaret Burke. When I was six years old we moved to Transallagh, St. Johnston.My father was a good hand with breaking in horses and training them to jump. He worked with the local farmers in the St. Johnston area. He often went with them to the Dublin Horse Show.

From our home in Transallagh, I walked every morning to the national school in St. Johnston, opposite the chapel. It was a long walk but there were a lot of others going to school with me. Some times we would climb the trees in Hamilton’s farm, which was on the way to school. Our teacher was Ms. Casey. One of my good friends at school was Susan Blee.  We were in the same class and played together. I also attended Castletown and the new school of St. Baithin’s, outside St. Johnston.

Some years later, I followed my older sister Jennie to Belfast. She worked as cook and housekeeper.  I was her assistant. I enjoyed Belfast, I went to dances in the Falls Road. I met a nice man called  Ronald. He had a tattoo of King Billy on his chest!  When Jennie moved to England and got married there, I returned home.

On returning home, I got a job as assistant cook in Gransha Hospital in Derry.  I worked there for three years. I cycled to work  every day from home. There were a lot of people from here  cycling into Derry at that time.  I cycled to Buncrana, Letterkenny and Raphoe on many occasions. There were very few cars on the roads, not like today!

When I left Gransha I moved back to Belfast again where I was cook/housekeeper to a family called Carr. Then my father died and I returned home to be with my mother. A year after my father died we moved to our new home in Ard Baithin.  There were only three of us at that time, my mother, Johnny (my brother) and myself. The rest of the family had  married.  Many others from the outlying area moved into the new houses in Ard Baithin. I remember the very day we moved in  because Susan Gillespie’s eldest child, Eamonn was born on that very day! Martha Gilchrist who lived in the Main Street, St Johnston, was the first person to visit us in our new home. It was a welcome change to live in a new and comfortable house, even if we didn't have electricity at the time. We used oil lamps. Our next door neighbours were Hannah and Charlie O’Donnell.

My aunt could tell a person’s fortune from “reading tea leaves”!  I learnt it from her.  Neighbours came to our house to have their teacups read. It was only a bit of fun to pass away the evenings! At that time people visited each other’s houses.  There was little else entertainment.  We always had people dropping into our house in the evenings for a chat and maybe sing a few songs.

We went to Kinnycally hall to the dances. There was always a dance there on a Sunday night. We also went to the Hibernian hall in St. Johnston. People had very little at that time. Everyone had to work to support the family.

I have visited my sister Jennie in Canada a number of times. I enjoyed those visits. I went to four All Ireland Football Finals in Dublin. We travelled by train in those days.

I have smoked cigarettes since I was thirty! I still enjoy a cigarette and a wee drink now and then!

When I look back over the years, I can say life was not easy back then, we hadn’t very much but we were much happier than people today. Crime was a lot less, we got little help from the government, we had to struggle on with our lives. We made our own entertainment. People visited each other more often, the art of storytelling was very much alive. We enjoyed our ceilis and dances.

Most of the people that I grew up have all passed away.  I wish I could turn back the years, but I am grateful for the life God has given me.

(Footnote : Mary continues to live in her home in Ard Baithin. Other residents of Ard Baithin are warmly invited to send in their recollections of times gone by.) 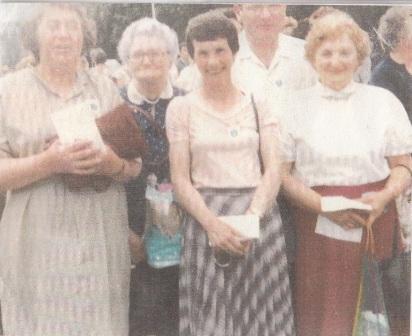