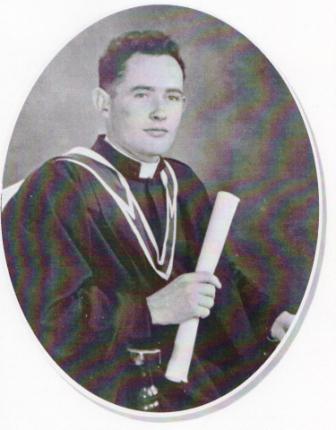 Mgr Daniel Carr was born 21st January 1939 in Ballyheerin, Fanad, Co Donegal.  He studied in St Eunan's College, Letterkenny.  His seminary training ran from 1958 to 1965 in Maynooth.  He was ordained to the priesthood by Archbishop John Charles McQuaid in Maynooth on 20 June 1965.

From July 1965 to July 1970 he was placed as a teacher in St Eunan's College, Letterkenny.

From September 1981 to August 1988 he was Dean of Discipline and Bursar.  He  became President of St Eunan's College in January 1982.

He played a huge part in the development of a network of computers in the college - the first network in the county.

He took up his duty on 1 September 1988 as Parish Priest of St Johnston succeeding Daniel Cunnea.  Later he became Diocesan Financial Administrator.

Dan Carr visited the priests of the diocese who were working with the Columban Fathers in Lima, Peru in the mid-nineties.

On January 22 1996 he was appointed Apostolic Administrator of the Raphoe Diocese after Bishop Seamus Hegarty was transferred to the Diocese of Derry.  Bishop Philip Boyce elevated Mgr Carr as Vicar General of the diocese.

In December 1996 he became Prelate of Honour with the title of Monsignor.

On February 26 2000 he was appointed a Canon to the Cathedral Chapter.

The fortieth anniversary Mass of the ordination to the priesthood of Right Reverend Dan Carr PP, VG, VF, took place on Friday 17th June 2005 at St Baithin's Church, St Johnston.  It was held at 8.00 pm and Bishop Philip Boyce presided.  The Church was packed and the first hymn was "This day was made by the Lord". The blessing of Holy Water was celebrated and the readings were from Isaiah, 2 Corinthians and the gospel passage was read from St John concerning Jesus being the good shepherd.  New Vestments were presented to Monsignor Carr at the beginning of the Mass.  Afterward, a buffet was held at the St Johnston and Carrigans Family Resource Centre and a presentation was made and Leslie Matthews provided the musical entertainment.

Father Carr's Sacerdotal Golden Jubilee was celebrated in St Johnston on Friday 12 June 2015.  It began with a 6pm Mass in the chapel.  A commemorative Mass booklet was produced.  Entrance hymn All are Welcome.  Gospel was from John 19.  Offertory hymn was In Bread We Bring You Lord.  Communion hymn Though We are Many.  Recessional Hymn was May the Road Rise to Meet You.

Here is some biographical information from the booklet, "Monsignor Dan Carr has been Parish Priest in Taughboyne Parish since 1988 when he succeeded Dr Cunnea and has devoted himself to the pastoral care of this flock and developing every aspect of the parish of St Baithin's Church, Car Park, Parish Schools and more recently extending and improving the cemetery.  He has also taken a great interest in the community of St Johnston and Carrigans and was instrumental in bringing together a local cross community community of Taughboyne Development Group, who were responsible in developing local job creation enterprise Riverview Meats which provided local employment for approximately thirty people and the regeneration of the villages of St Johnston and Carrigans".