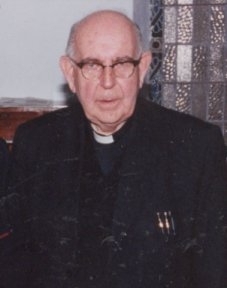 The Very Reverend Daniel G Canon Cunnea PP DD, commonly called Doctor Cunnea, became Parish Priest of St Johnston and Carrigans in 1969.  He was parish priest of Newtoncunningham and Killea as well when these areas were all the one parish of Taughboyne.  Newtowncunningham and Killea is now a separate parish.

Canon Cunnea was born in Inver in 1913.  He was raised in Croagh, Killaghtee, being the eldest of five children. His education started in Croagh National School and won a scholarship into St Eunan's College in Letterkenny in 1926.

In 1931 he went to Maynooth to study for the priesthood.  He was awarded the Gilmartin Prize for History.  He was ordained to the priesthood on 15th June 1938.  After that he went to the Dunboyne Establishment where he earned a doctorate and a Higher Diploma in Education in1940.

Before he joined the teaching staff of St Eunan's College in Letterkenny in 1942, he taught for two years in Knockbeg College which is in Carlow.  He taught a number of subjects chiefly science and mathematics

He was appointed president of St Eunan's College in January 1961.  He was responsible for the upgrading of the science facilities with the building of two science laboratories and a demonstration room in 1964. He left to become parish priest of St Johnston and Carrigans in 1969 succeeding Canon Mulreany who was posted in Stranorlar.

Canon Cunnea celebrated his Golden Jubilee of Priesthood 15th June 1988 at a Mass presided over by Mons Dan McDyer PP VG because Bishop Hegarty wasn't able to attend.  The Mass took place on a sunny evening at 6.00 pm.  The opening hymn was Praise the Lord all you nations and Dr Cunnea prayed the Opening Prayer, "Father, I thank you for fifty years in the service of your Gospel and your Sacraments, through our Lord Jesus Christ your Son who lives and reigns with you in the unity of the Holy Spirit, One God forever and ever.  Amen."  Tell Out My Soul was the closing hymn.  Afterwards, there was a reception afterwards in the InterCounty Hotel in Lifford.

Canon Cunnea retired as parish priest in 1988 and a celebration of the event was again held in the InterCounty Hotel, Lifford.  Dr Cunnea was presented with a television and a video on the occasion.

Canon Cunnea left the Parochial House in St Johnston in 1988.  Canon Cunnea resided in the Main Street, Carrigans, during his retirement.

Canon Cunnea died on August 9th 1990 and was interred in St Johnston.

He is remembered as a quiet and modest man who was extremely fast and good at crosswords and at chess.  Prior to becoming a Canon, he was simply known as Dr Cunnea and most who remember him still refer to him like that.

Below is the foreword Canon Cunnea wrote for the Pairc Colmcille Souvenir booklet in 1987. 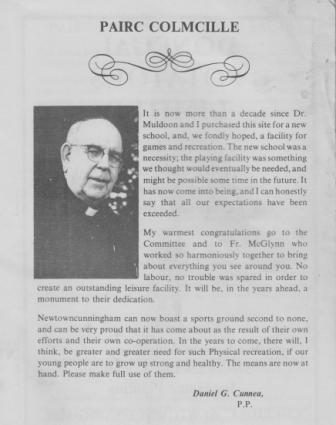