The Wauk Mill Roman Catholic Chapel was approached by a lane.  A humble gate led into the chapel grounds.  The site for the chapel was donated by the Duke of Abercorn.  Penal laws at the time had been relaxed a bit.  Catholic Churches of stone were allowed whereas before Churches had to be made of wood and at a distance away from the county roads.

The Wauk Mill Chapel was built of stone not wood and was built a good distance from the road.  Today there is no sign of this Church.  The Church was last used in 1860. It was de-consecrated and soon after it was demolished.  The stones would have been used to build walls and in the construction of buildings that still exist at the mill.

There was no graveyard adjoining this Church.  Burials took place usually in the Old Graveyard St Johnston or the older churchyard of Taughboyne Church.  It is not known where the local Cillín was.  A Cillín was a place for burying the remains of babies that died without being baptised.  Stillborn babies were buried there.  Typically, babies were buried outside the cemetery along the wall.  Such burials involved the father carrying the body and the burial took place at night.

Bishop McGettigan preached there Palm Sunday 1857 on the day he blessed the foundation stone for the new Church - the current St Baithin's Church.

It is described as, "the little building where for some sixty years they and their fathers had worshipped" (Derry Journal, December 5th, 1860).

The chapel was a plain stone building with a possibly thatched roof.  The Church in Newtowncunningham had a thatched roof.  However, it seems that the chapel at the Mill had a slated roof as slates can be found in the pillar that is the only thing that remains. It is tempting to believe that the Church was a barn or shed that was converted and the pillars erected later.  If so, the Church had ceased to have a thatched roof then and some of the leftover slates were incorporated into the pillars.

The Church had a main door facing the gate - one of the pillars is still standing.  To the left hand side going in there was a room used as the sacristy.  The priest walked right up between the people to the altar.  The font for baptism would have been near the door.  This was because the then baptism ritual required that certain rites be carried out over the baby near the entrance to the Church.

There would have been no seating inside.  Worshippers would have knelt on a floor of bare earth.  Flagstones were probably restricted to the sanctuary - the area where the altar was.

The Stations of the Cross were probably represented by plain crosses on the walls.  It is safe to assume that Stations were installed as we know the stations were popular in pre-famine Churches in Co Tyrone.

There would have been no stained glass windows.

Doubtlessly, there would have been sermons condemning the practice of keening.  The clergy tried hard to stop this practice in the nineteenth century and had little success.  As there were no local holy wells or shrines to compete with clerical authority and to act as a substitute for hearing Mass, the clergy nevertheless would have had considerable influence over the Roman Catholic peasants.  Faction fighting and drinking were other sins that the clergy tried to stamp out.  They were largely ignored in these things.

Right Reverend Mgr Stephens was the last Parish Priest of this Church.  He was moved to Killybegs where he was Parish Priest and died there on February 1 1886.

During Lent, until the 1960's, Catholics were only allowed three meals a day and dances and marriages were banned.

After the chapel was de-consecrated, it was used for storing lint and demolished some time later. 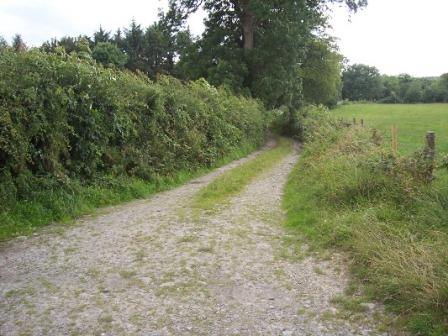 Lane to Chapel, virtually unchanged since the time the chapel existed - 19 July 2009 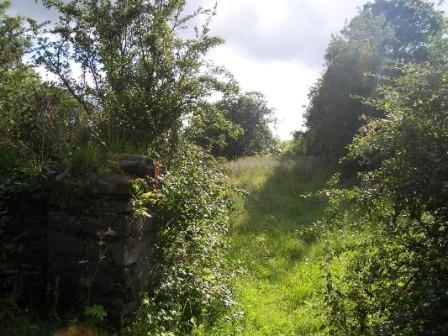 Entrance to Chapel Site.  The pillar is the only thing left of the chapel.  The pillar is made of flint and different stones and even slate giving rise to the belief that the chapel had a slated roof.  19 July 2009.  The gate has disappeared since the mid-nineties. 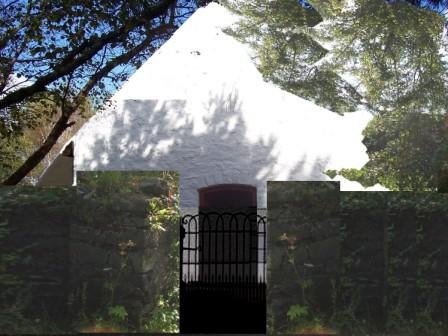 This image is based on an existing mass house.  The position of the chapel can be worked out from an area of raised ground full of stones from the walls.  Tradition says that the original chapel in Newtowncunningham had only four walls and a roof and a clay floor and no seats.  There is every reason to believe that the original Church at St Johnston would have been the same.  There would have been a fireplace inside.  This must have been at the other end of the Church behind the altar. Unlike the original Church at Newtown, which had an especially inscribed foundation stone that has been preserved, there was no similar stone for the St Johnston Church. 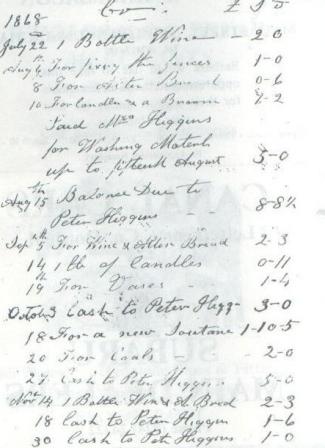 This is an excerpt from the Accounts Book for nearby Newtown Chapel in 1868.

It gives some idea of what would have been needed for the Wauk Mill Chapel.  Coal.  Bottles of wine.  Altar Bread.  Vases.